Would you like to switch to the accessible version of this site?

Don't need the accessible version of this site?

Kevin received his undergraduate degree in Athletic Training from the State University of New York at Cortland. Starting as a certified Athletic trainer he worked both in NFL as well as with college athletes focusing on accelerating the rehabilitation for injured athletes. In 1995 received his Masters Degree in physical therapy from Touro College and is currently finishng his Doctorate Degree a the University of Montana.

Since 1997 he has been the Director of Rehabilitation at various rehabilitation centers on the east coast, Applying his approach to adults and seniors has allowed his clients to reach their fullest potential. While in the Lake Norman area he completed several studies in reducing time lost to work Injuries,   Ergonomics, Peripheral Neuropathy and has worked with many Dentists and Surgeons to effectively treat jaw pain and dysfunctions of the TMJ.

In 2007 Kevin began to lecture, teaching clinical advances to other therapists and medical professionals. He has presented at over 200 seminars in specialty areas of Manual Treatment of the Upper quarter, Conservative management of the TMJ, and Treatment of Peripheral neuropathy. He is currently developing a lower quarter course with a focus on sports performance.

In 2011 Kevin opened K2-Sports Therapy and performance providing physical therapy to the Lake Norman Community. His goal is to have every client reach their fullest potential.

Gwen graduated in 1991 from the University of Wisconsin-Madison. She started as a certified athletic trainer. Her experience includes National Teams such as the USA team Handball, USA Rugby, RCA Tennis Championships- Men's Tour, Outreach with several NASCAR and INDY car teams. She has focused her career on outpatient physical therapy and sports medicine with outreach into the community.

Sabrina recently joined K2 Sports Therapy in September 2018. In 2014 she graduated from Université Laval in Québec, Canada with her Masters Degree in Physical Therapy. Before she got her Masters, she got a Physical Therapy Assistant Degree from Cégep FXG. During her time at the University, she worked as a PTA in an outpatient facility through her Master’s Studies and was a student helper with various football teams. Sabrina is a group fitness instructor teaching several Les Mills formats. She is originally from Québec, Canada and loves being active both indoors and outdoors. In her free time she enjoys spending time with her friends and family, reading, and traveling! 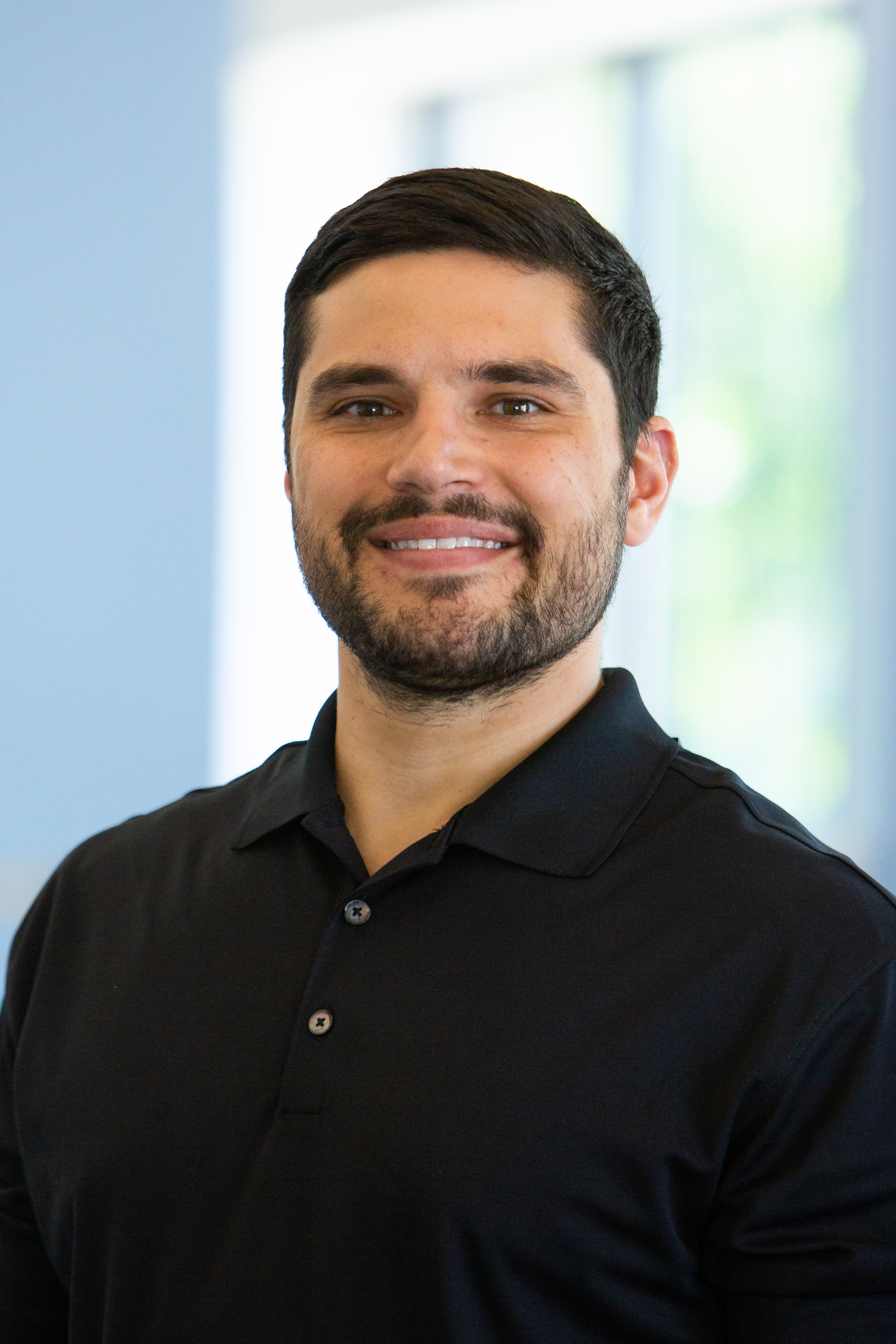 Adam received his undergraduate degree in Health Promotion from Appalachian State University in 2010, where he was a member of the football team from 2005-2009 winning three national titles. Once completing his undergraduate degree, he worked as the Wellness Program & Personal Training director at a YMCA in Linville, NC for almost four years prior to returning to graduate school. Adam earned his Doctorate of Physical Therapy Degree upon graduating in December 2018 from Wingate University. He enjoys exercising and believes that fitness and nutrition play an important role in the world of physical therapy. In his free time he loves spending time with his wife, Brooke, and son, Levi, and is a big time football fan! He also enjoys playing golf, spending time with friends and family, and learning about movement and the human body. Adam is originally from Arcadia, NC near Winston-Salem. 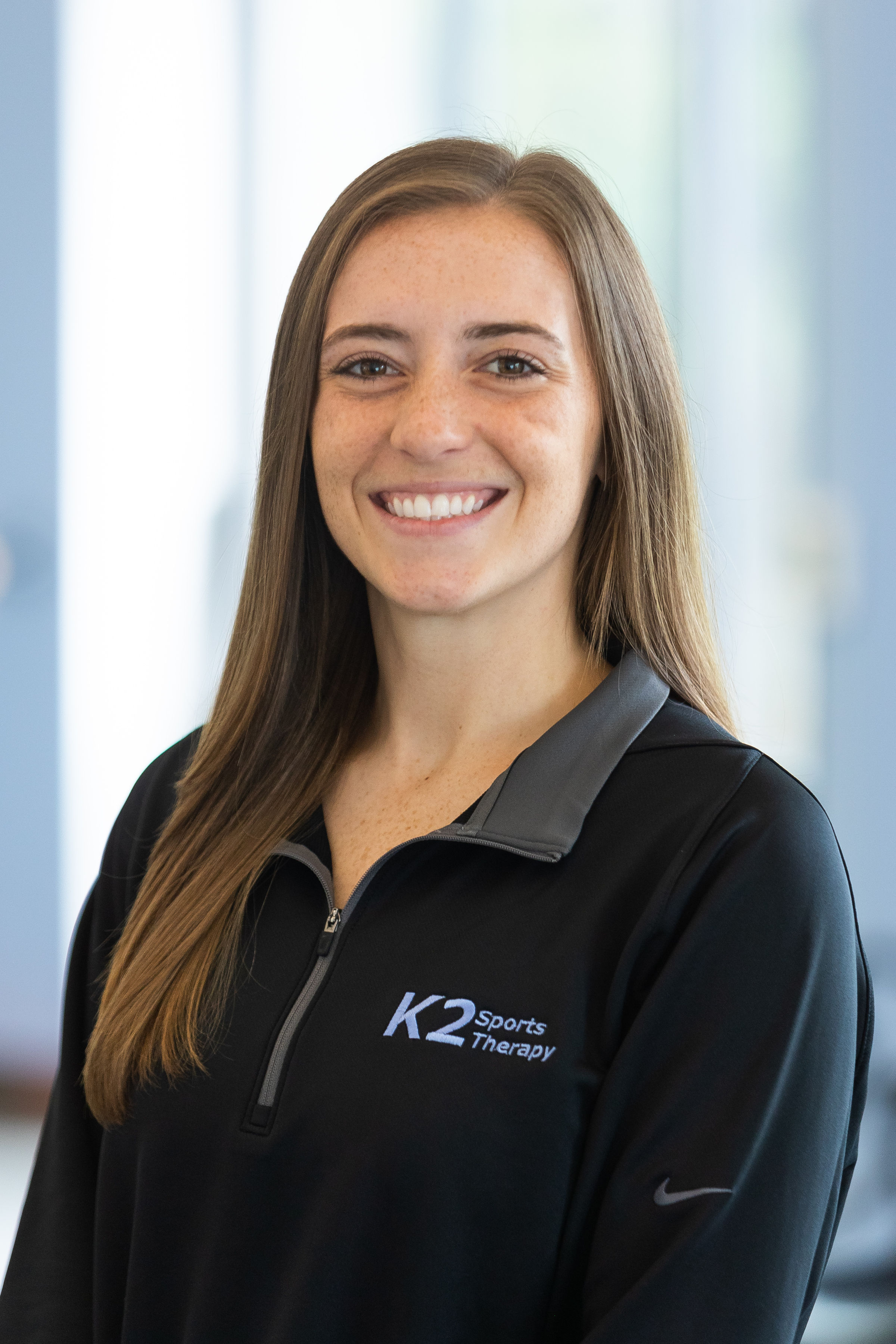 Holiday graduated from McMurry University in 2016 with a double major in Exercise Science and Human Performance and concentrations in Pre-Professional and Athletic Training. She was on the women's soccer team all four years and was elected to captain her senior year in addition to receiving the ASC Distinguished Scholar Accolade. After completing her undergraduate degree, she attended Texas Woman's University to earn her Doctorate in Physical Therapy and graduated in May 2019. Holiday enjoys traveling and all things outdoors including hiking, running, kayaking, snowboarding, and rock climbing. She is also a Young Life Leader at Mooresville High School. Holiday is originally from Bedford, Texas and now lives here happily with her dog Page.

Manny has been a Physical Therapist Assistant at K2 Sports Therapy since 2015. She graduated from Appalachian State University in 2013 with her Bachelor’s in Exercise Science with a Strength and Conditioning Concentration.  Before attending Central Piedmont Community College for her PTA degree she became a Certified Strength and Conditioning Specialist.  She grew up in Huntersville, NC playing soccer.  Now she attends Crossfit classes at Crossfit Northlake and has two golden retriever pups, Honey and Winston!

Ashley has worked with K2 Sports Therapy for 2 years. She earned her PTA Degree at Central Piedmont Community College in 2016. She was born and raised here in Charlotte, NC. On the weekends she stays busy adventuring with her husband, Jake, and her two puppies! 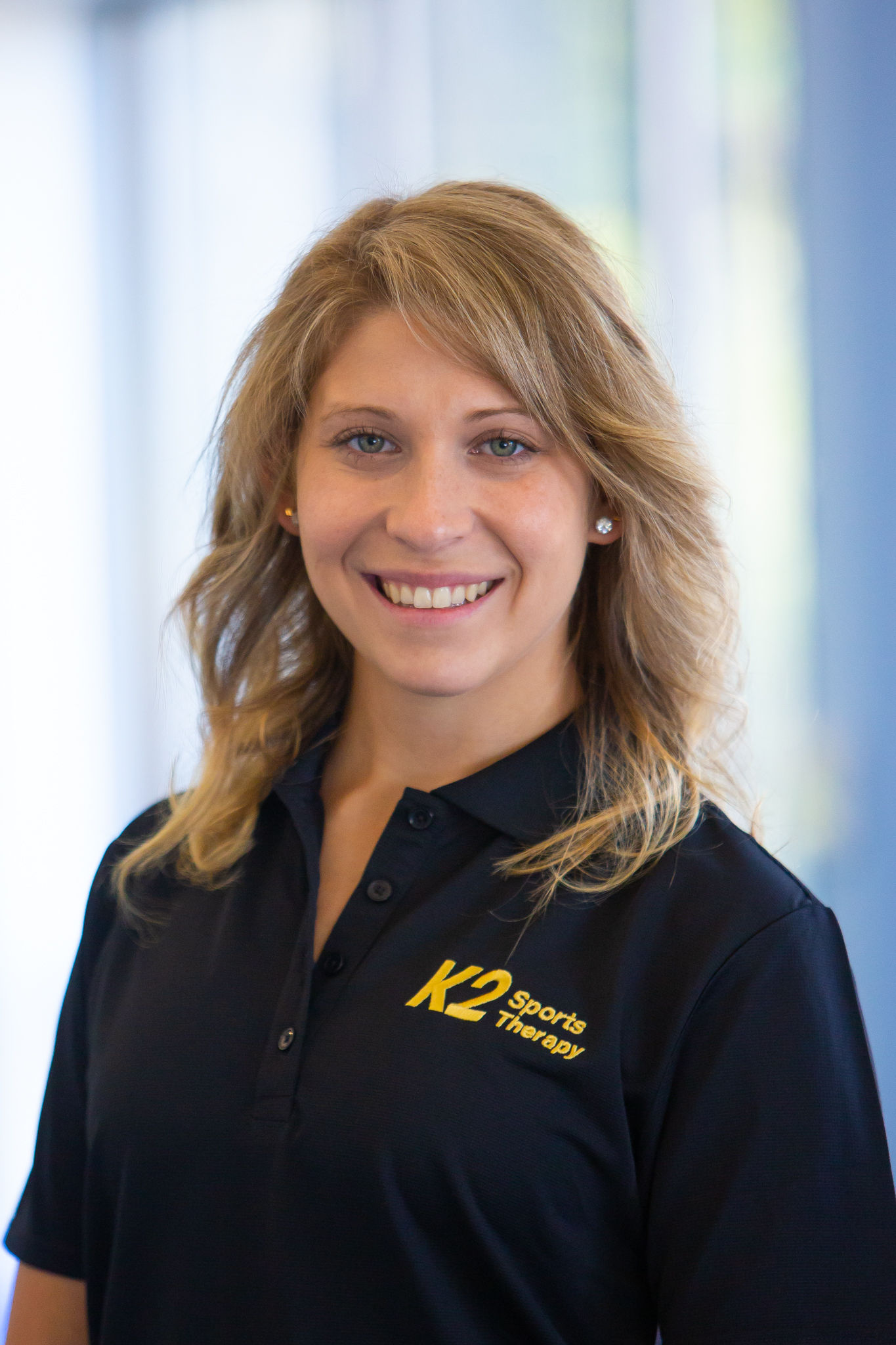 Larissa has been a PTA since 2015 and graduated with high honors from Herzing University in Florida. She was born and raised in New York where she played volleyball along with 16 years of gymnastics and dance. She will graduate from UNCC in May of 2019 with her undergraduate degree in exercise science. In her spare time she loves to draw, travel, and participate in outdoor activities.

Tamara has been the Office Manager at K2 Sports Therapy since 2015 and has over 20 years of experience in the medical field. She is originally from Georgia where she graduated in 1994 with a degree in Medical Studies from the University of West Georgia. Tamara and her husband Cliff have two girls who have graduated college and a son that is currently in high school. She loves spending time with her family, watching her son play football, supporting UGA on the college field, and absolutely adores her German Shepherd Addie!

Sonya has worked with K2 Sports Therapy for two years, she moved from Tampa, FL to North Carolina in order to be closer to her three daughters. She is American Counsel Exercise Certified and has 10 years of experience in Group Fitness. She is currently studying Nutrition Consulting with American Association Nutrition Counsel with the hope of positively influencing patients health. Sonya is a “nutrition nerd” and those around her know that her world lights up when two little boys and one girl call her MiMi! 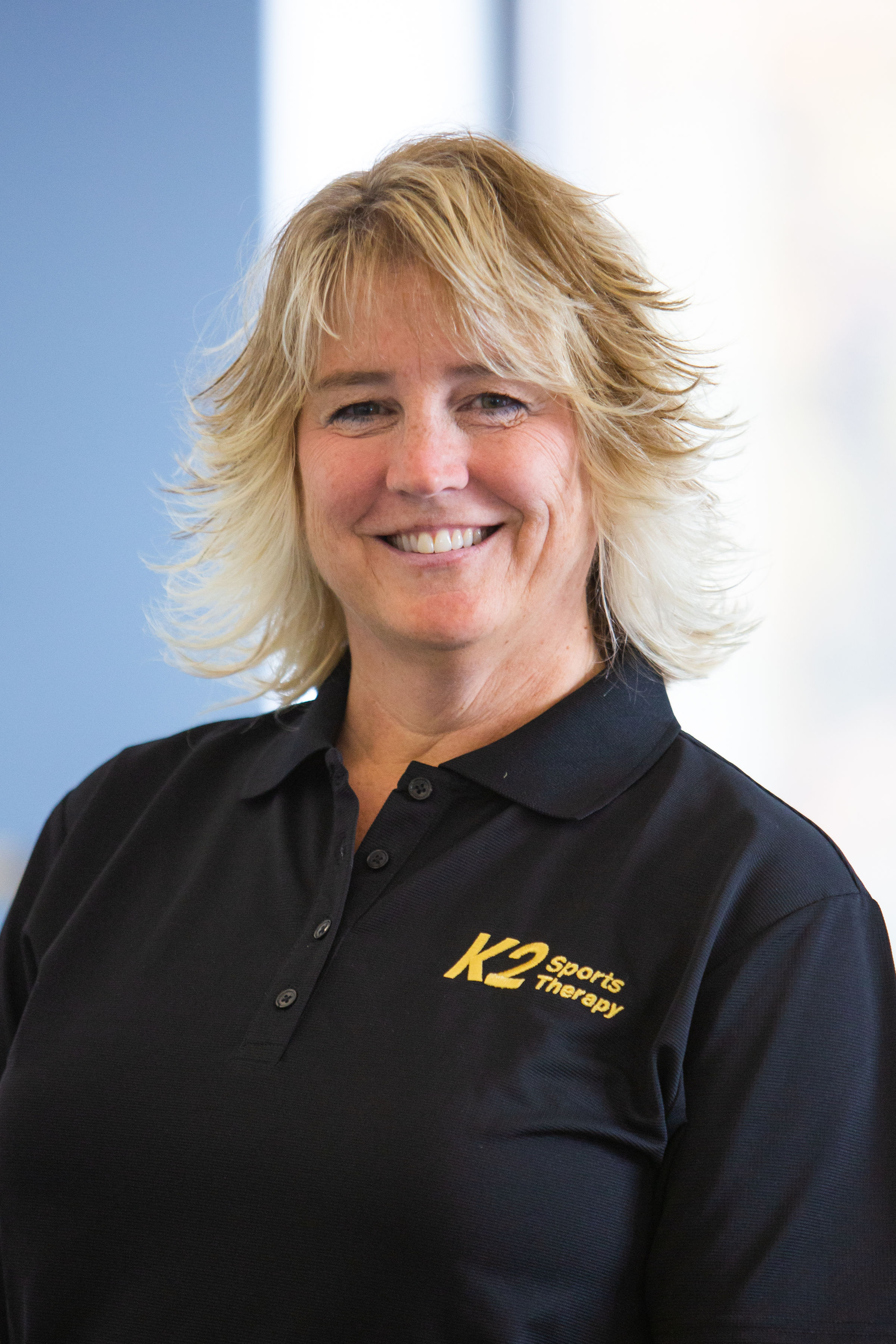 Lisa recently joined K2 Sports Therapy in November working as a front office staff member. She moved from Dayton, Ohio with her husband and son. Lisa has 7 years of experience working in a physical therapy office back in Ohio. Previous to working in a physical therapy office, she was a librarian for 10 years. In her free time she enjoys playing with her new kitten Norman, going back to Ohio periodically to visit her daughter, and spending time with friends and family.

Morgan was an intern for K2 Sports Therapy in the summer of 2017 but officially joined K2 Sports as a member of the staff in August of 2018. She was born and raised in Kirkland, Washington where she was recruited to play Division I Softball for Fordham University located in the Bronx, NY. She graduated from Fordham in May of 2018 with her B.S. in General Science, Cum Laude Honors. Morgan was recently accepted into Wingate University’s Doctor of Physical Therapy Program, which she will begin in January of 2020. In her free time she enjoys exploring her new home here in Charlotte and loves traveling the world with her family.